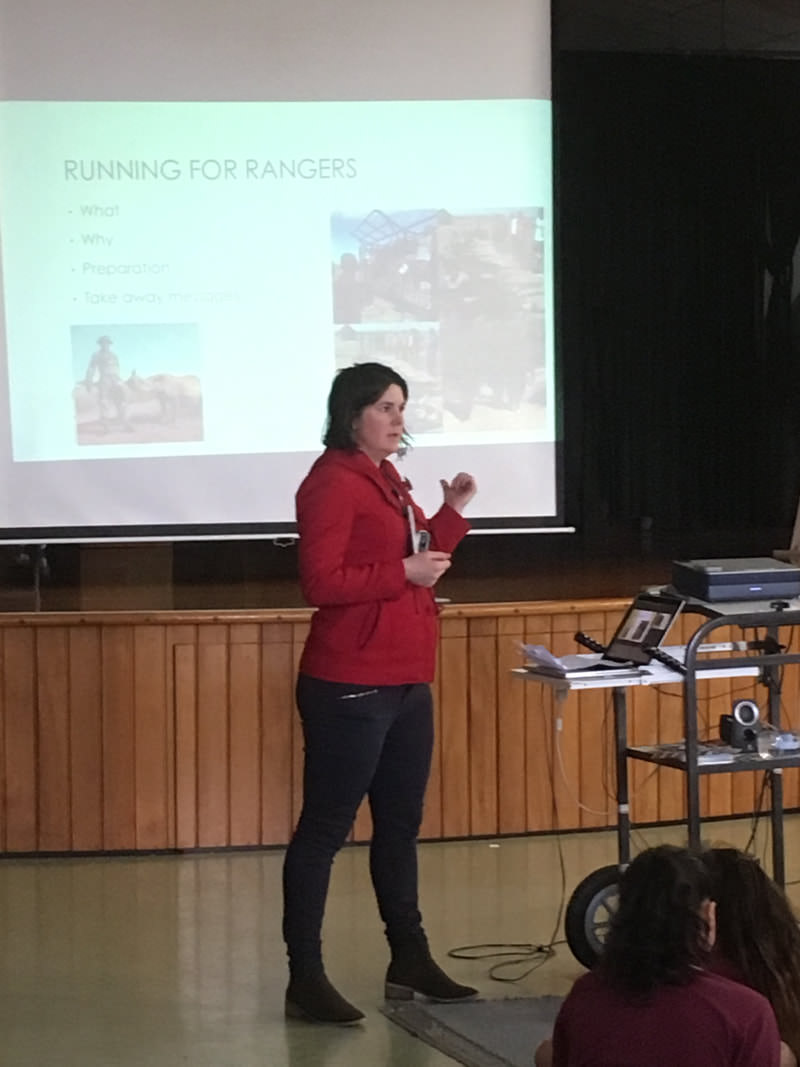 WOW! The senior school hosted Anna Rhodes on Tuesday. Anna shared with us her experiences to date, as she prepares to take part in the Running for Rangers event coming up in Kenya. you were very inspirational Anna and entertaining 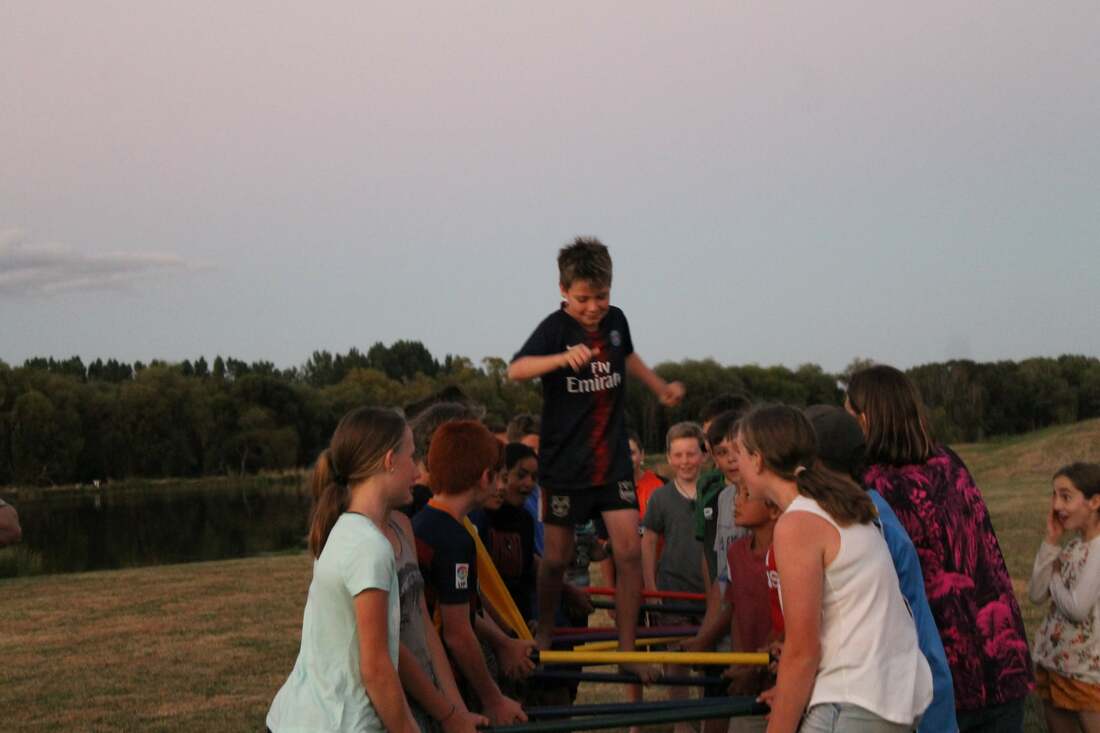 As the sun was setting Anna called us to the field. There were a piles of sticks laying on the ground.
Only a few people knew what the sticks were for; the Human Ladder. In pairs we gripped an end of a stick each. Each pair stood shoulder to shoulder so there was 12 rungs to our ladder. Then one by one we attempted to keep balanced long enough to walk across the ladder. The ladder was approximately 80 cm above the ground. Once it was my turn I stepped up and started walking. I tried not to touch anyone, rather keeping my own balance. Half way through someone wasn’t watching when I stepped onto their stick. It dropped to about 30 cm off the ground. They lifted it back up and I finished without falling off.Kaleb Withey 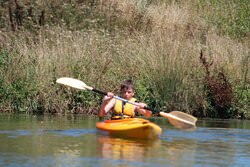 It was a hot summer afternoon. People raced to get to the kayaks and paddle boards. I was lucky and got a kayak. I sat in the kayak as it slowly drifted into the water. I tried paddling out of the marina. My legs were burning as the heat from the leg rests were boiling hot against my skin. Most people were paddling to a small island west of where we casted off. As I was kayaking I was getting nervous because the kayak was rocking side to side more than I thought it would. As the lake calmed the rocking slowly stopped. Gathering speed was surprisingly easy to do. I managed to keep the kayak steady and keep it afloat. Early in the evening, after a long day on the lake, it was time to get out of the water and pack the kayaks up. 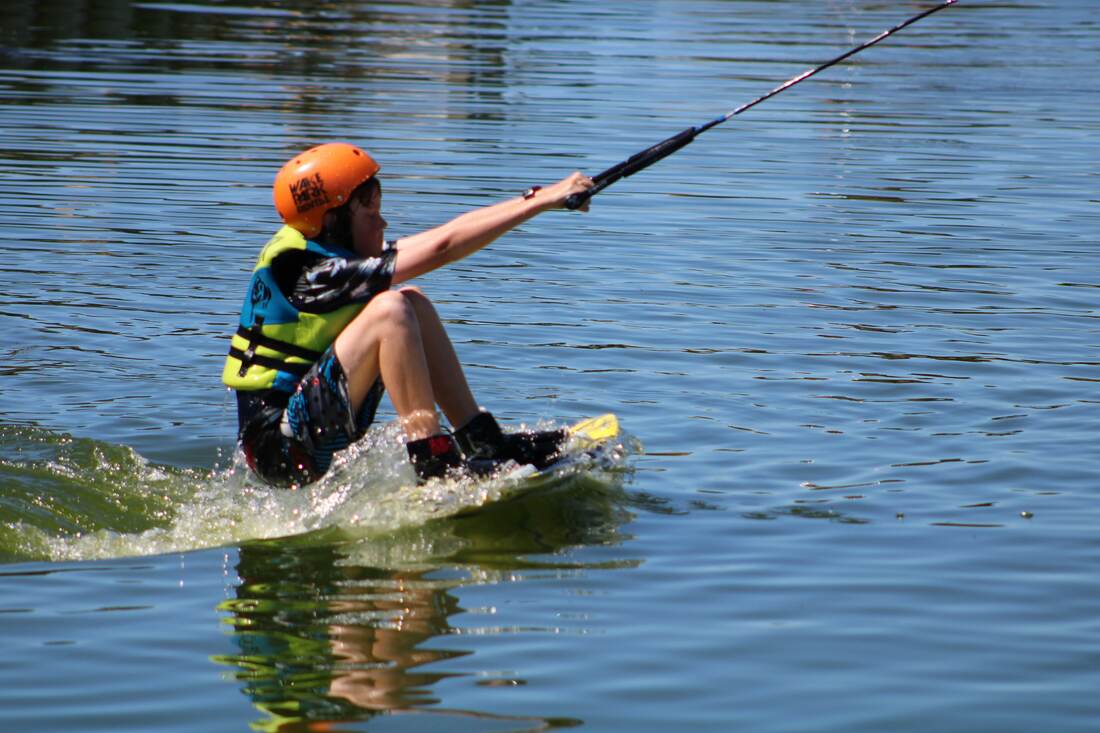 Floating around in the Marina I noticed an unused paddle board on shore. I swam over and pulled it into the marina. I hopped on and started paddling the board. It took a while to get the hang of the paddle boarding technique, particularly the paddle and where to place my hands on it. Satisfaction came, as I got better, and I gave my paddle board to Oly for him to have a turn. I found an inflatable board. Quickly I wished I had kept my original board since I was finding it near impossible to stay balanced on the inflatable board. I spent 60% of the time in the water. Unfortunately I became a spectacle. Eru who was watching us, came in for a closer look and asked if I needed any help.Fortunately Eru & I realised that I had to come in for dinner and so the spectacle I was creating finished. Although I had enjoyed the challenges of paddle boarding, I vowed never to attempt an inflatable paddle board again. 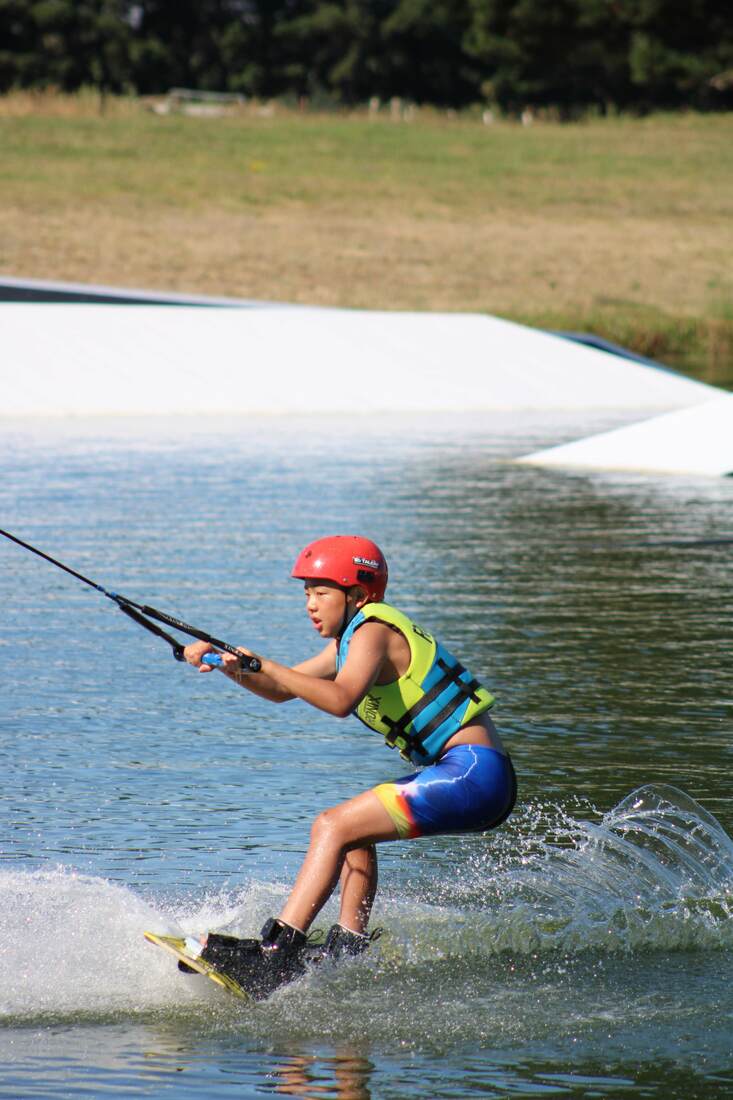 I nervously walked over to the wakeboard and I could feel the sun already burning my back. As my turn slowly approached I felt my stomach getting butterflies. I hopped into the lake and the refreshing water made my back feel like it wasn’t burnt at all. I held the handle of the cable and it quickly got to a high speed, then I felt myself lose balance and belly flop into the water. My second attempt was very successful. Although I was going well I had trouble turning around. At this point the butterflies escaped out of my stomach and confidence came in. After my turn was up I was keen to have another go on the wakeboard. 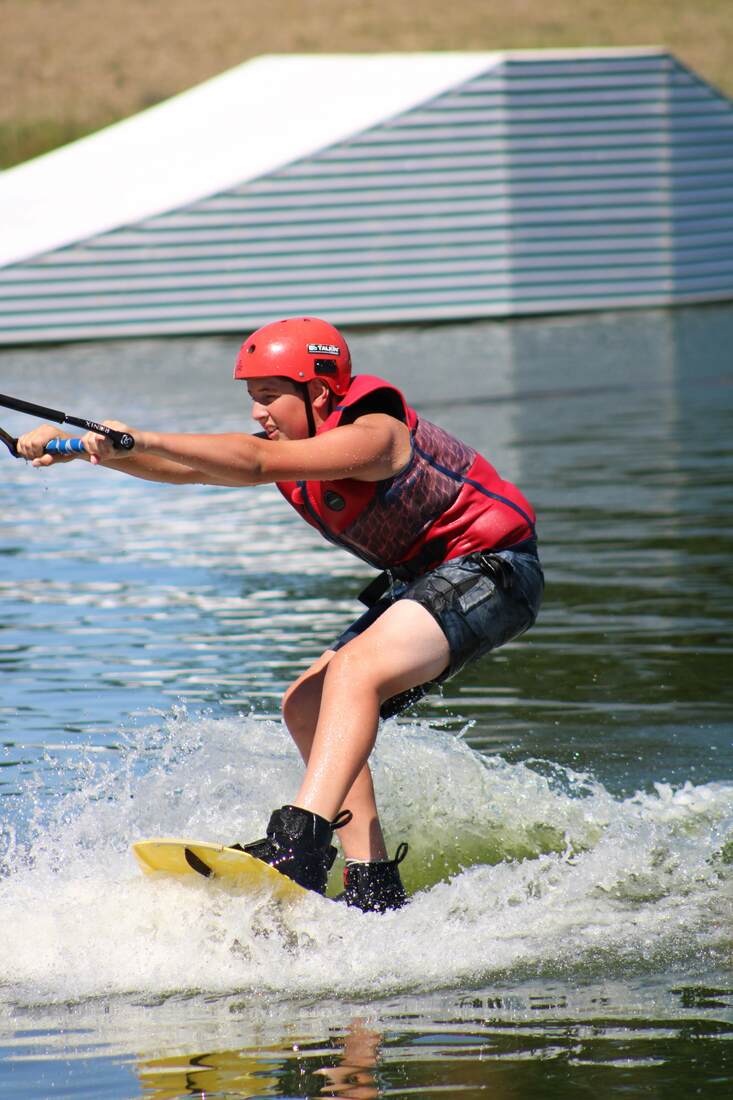 It was a stunning summer morning and when I opened my eyes I could see the sunrise coming over the trees and hills.  Anna woke up and got out of bed and told us to be ready for a morning run. Everyone moaned and groaned, because it was a run to the end of the drive way and back, It was a hard 2km run on the loose and corrugated gravel. As if the run wasn’t hard enough, when we got back Anna made us do push ups, situps and even 2 minute planks that made us all moan and groan more. We arrived back at the camping area to the smell of pancakes cooking on the barbeque. We were starting the day ready and prepared for whatever else was to come our way. 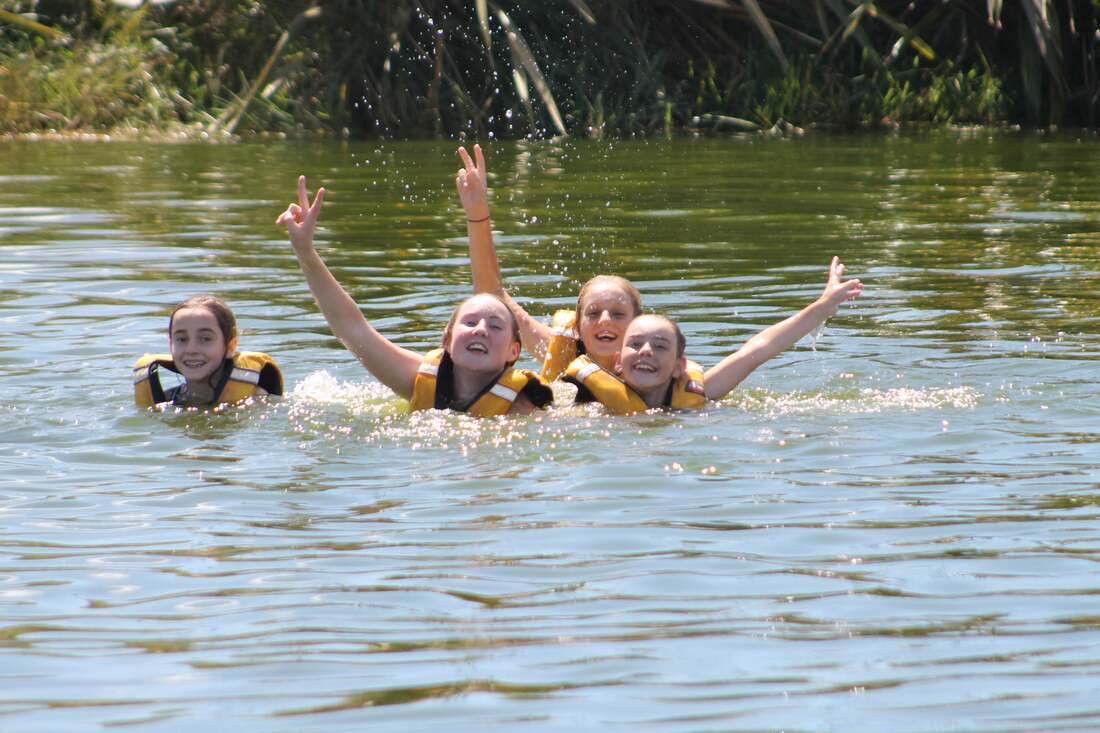 It was great to finally arrive at Back Paddocks Lake. I looked across the camp area and got out of bus, ready to go!  After we unpacked and had finished morning tea, it was time to swim. I was nervous at first, but swimming was fun. As everyone dived in, I took a breath, ran and jumped in, “YUCK!” Seaweed wrapped itself around my legs.  It was cold but refreshing. I was happy, having fun until…..someone mentioned there were eels! 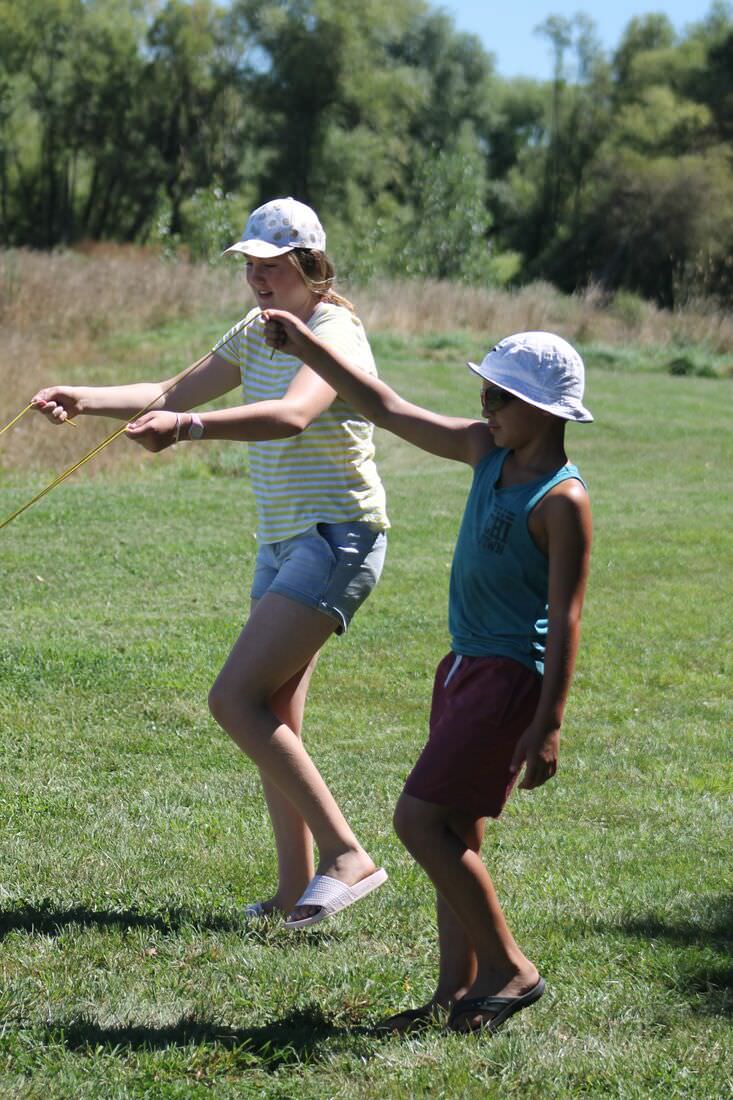 It was a sunny morning on February 13th as Huia Range year 8 students, teachers and parent helpers boarded the bus to Back Paddocks Lake for our leadership camp.  Once we arrived, had set up our beds and had something to eat, Anna put us into our problem solving teams. During the afternoon we rotated around different teamwork/team building activities. By this time the temperature had risen into the late 20s.  Mostly my group worked well to work out through the different problems. We jumped over ropes, made puzzles, balanced a bottle on a disc and transported it from one place to another, piggy backed each other across ‘lava’, and tried to walk in unison on enormous skis.

It was a wet and windy Wednesday morning when the Year 8 students at Huia Range School were packing up the bus, getting ready to go to their leadership camp.  It was a really exciting 35 minutes waiting to arrive at Backpaddock Lakes, Takapau.  Thirty-six students tumbled out of the bus, arms full ready to start their three days of learning, cooperative activities and water sports. 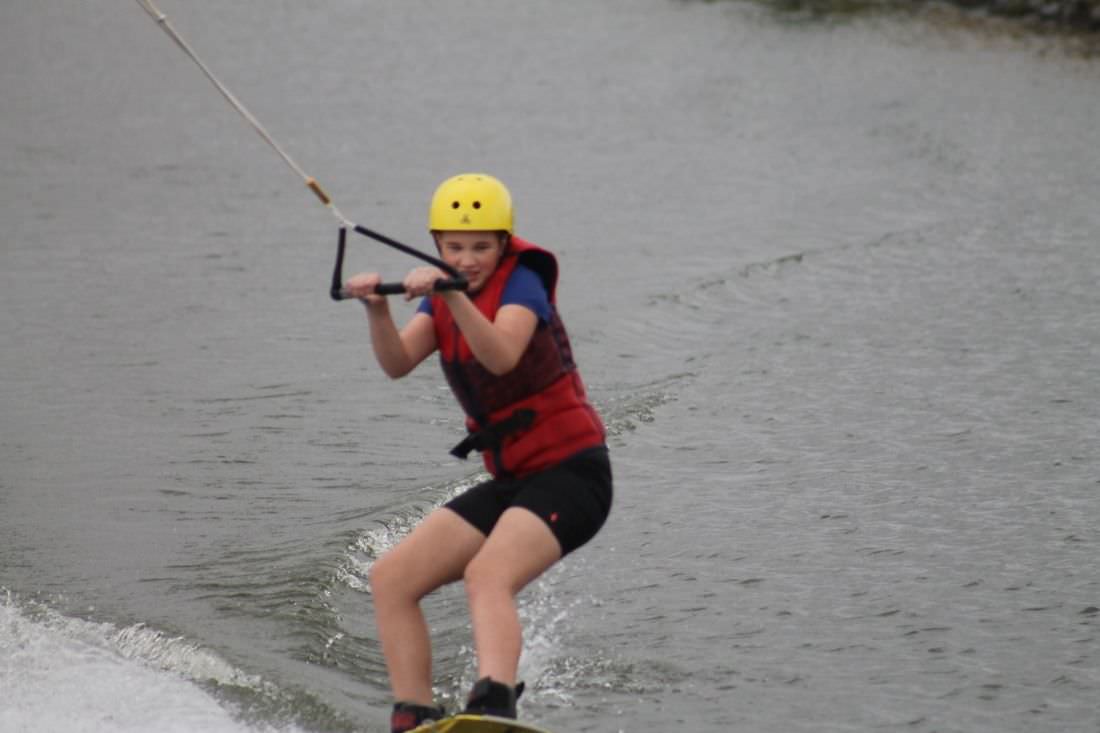 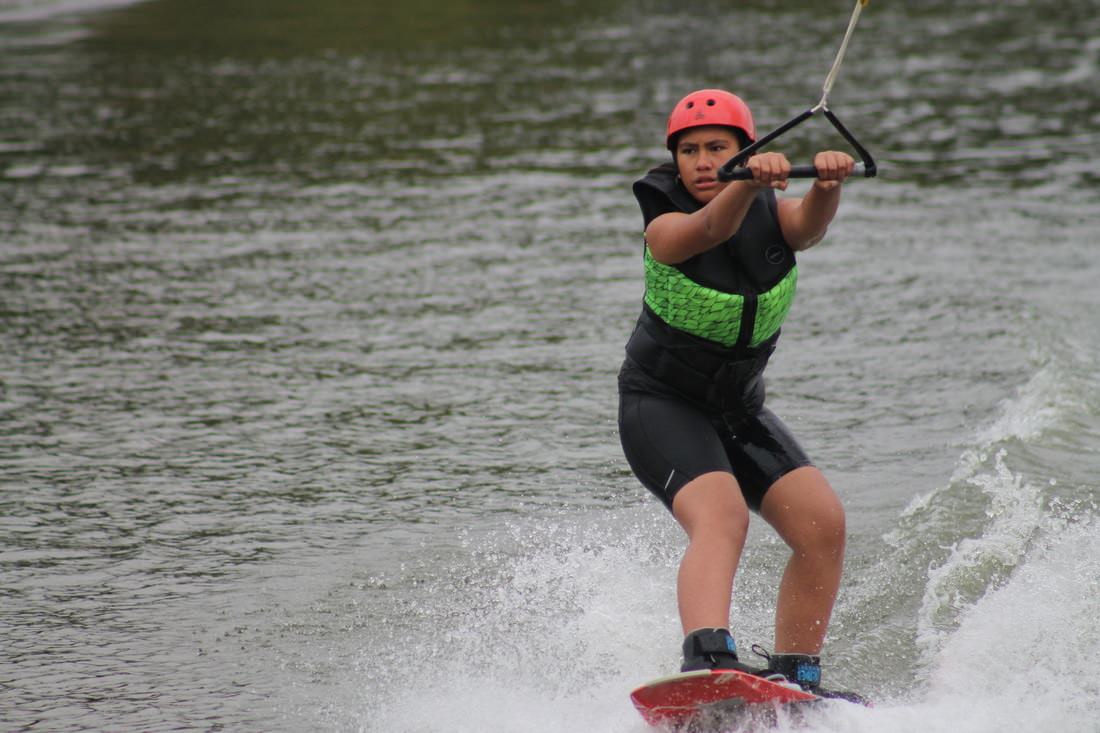 Arriving at our camp-site, we were surprised to find out that we were sleeping in an incomplete hall with only a concrete floor and a roof.  Marque tent walls were later erected to help keep out the wind and rain.  While still snuggled up in our blankets we were shocked to be woken on the second morning at 7:00 am by a teacher and told to get ready for a 2 km run at 7:15. 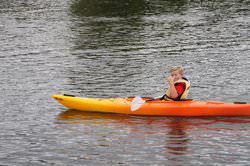 We spent a lot of time in our make shift classroom learning about the key components of a leader.  Most of the time we shared our ideas.  I listened and looked to who was saying them to give me an idea of whom I thought would be a good leader and how I could be like them.  Values, roles and STRIVE were our main focus.  We looked at the values we each had and what values a leader would have.  Our roles as leaders was an important part of why we were on leadership camp and how this would link back to our motto STRIVE; Self awareness, thinking, respect, integrity, values and excellence.  This was our work but it was not what I was looking forward to.

Outside of the classroom was fun and exciting.  It was a chance to get on the water in many different ways, kayaking, yachting and cable wakeboarding. 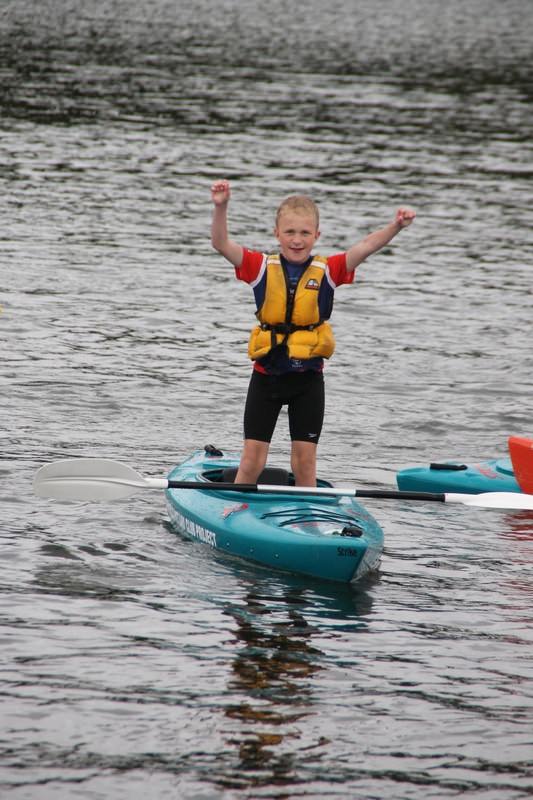 My group did yachting first.  Tiaki and I took one yacht.  While setting up one of our ropes got jammed, so Tom, our instructor, helped us by using a fork!  While on the water I was in control of the sail and rudder.  I wasn’t very good because I almost crashed or flipped the yacht.  There was not a lot of wind but every now and then we would catch a breeze.  It was surprising how quickly the yachts could sail across the lake.

Our group started off kayaking.  We headed off to a mini man-made island at the southern end of the lake.  When we got to the island a few mates and myself stated skimming stones.  After a while we got back into the kayaks and rafted up.  We had to do a challenge.  The challenge was to get out of our kayaks, one at a time, and walk across the other kayaks.  Once you reached the end you had to come back and get back into your kayak. 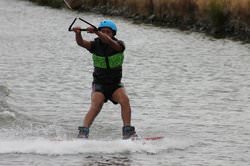 When Anna said that my group was on wake boarding my heart sank.  I tried to act excited but I was so nervous.  The instructor running the cable was good at wake boarding.  I was pretty sure he was a professional.  I had attempted the wake boarding last year with little success and didn’t see how this year was going to be any different.  Although I tried to get out of it Anna wouldn’t let me and my turn came up.  To my surprise after just a couple of failed attempts I was away.  I could wake board up and down the lake, although not make the turns.  I did not want to get off the wake board after that but others were lined up for their turn so my turn seemed to end all too soon. 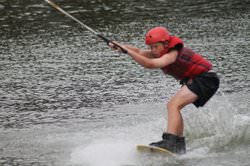 There was also a rivalry around the camp as we were put into groups.  Each group competed against each other in team building events.  These challenges tested our ability to collaborate with anyone no matter the circumstances.  These challenges were fun and hard.  Everyone excelled in their own way.

The Year 8’s had had so much fun at camp and I loved all the activities.  I hope next years Year 8’s get to go to Backpaddock Lakes and have as much fun as we did at Leadership camp.